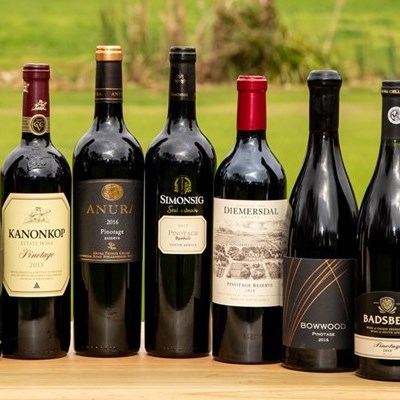 Out & About with wine.co.za - Francois Pienaar at Marianne | Pinotage Top 10 Awards | Old Vines Tasting at Volkskombuis | Women in Wine at Allee Bleue

Anomalous August! From two weeks of relative quietness to a sudden rush of some of the best events all year! We celebrated the dedication of the '95 to Francois Pienaar at Marianne, witnessed excellence at the Pinotage Top 10 Awards, sipped heritage with an Old Vines tasting and honoured women with the Women in Wine at Allee Bleue.

We joined Marianne Wine Estate to celebrate the unveiling of '95 (The Desirade 2015), created to honour Francois Pienaar. This was a spectacle of an evening. Upon arrival, we were led into Marianne's cellars to be greated by a harpist and a glass of their impeccable MCC. The intimate cellar meant making new friends was unavoidable and a chance to shake the hand of Francois made my father a jealous man indeed. "You're so tall" a guest exclaimed. "Thanks, but I was actually one of the smaller guys in the team" he replied with a smile. From there the evening only became better, with an exceptional performance by Paul Roos Choir. -Ed

The 2019 Absa Top 10 Pinotage Awards Ceremony held at Boschendal. It's really quite something, seeing people who've worked hard for something, being recognised for their efforts. It's something else to realise those efforts affect all of us as South Africans due to the work being put into building Pinotage as a global brand, and how proud we ought to be, for how far the variety has come.

The Old Vines Project is going from strength to strength, and judging by the buzz at the tasting held on Tuesday 13 August at the Volkskombuis, there is no stopping this train. If your vineyards are older than 35 years old, then I urge you to register with the project as there are plenty of marketing opportunities and I think the project is going a long way to assisting the prices of wines in South Africa to be raised.

Women in Wine at Allee Bleue

August is Women's Month and it has been a while since we really celebrated Women at wine.co.za, so I was delighted to find out about a casual gathering arranged by assistant winemaker Georgina Wilkinson from Allée Bleue for 1st August. Off I went and what a pleasure to connect with women of all ages and levels of experience in the world of wine. - Judy Brower